Well it happened again this year, I went into January with great expectations for my training and I was working to get into weekly routine, for the first 3 weeks, it was an ok but not a good routine, I got in all of 46 miles. For the next 4 weeks I have gotten in the grand total of 21 miles and 6 of those were running with Wayne last week.

So what happened, the normal and the not normal. The not normal was at the near the end of week 4 my back went south which led to a poor week 5. The back was better by week 6 but between the weather, work, robotics and an obvious lack of commitment, well,  I just haven't gotten my runs in.

So from here on most of my margin is gone and with my first marathon just a little under 10 weeks away, the time is now to get focused on sticking to my plan. So with maybe just a little room for adjustments, here is my planned weekly mile totals, you can see my long runs are either on Saturday or Sunday, the good news is once I get my training in for the first event, the rest of the events pretty much take care of themselves. 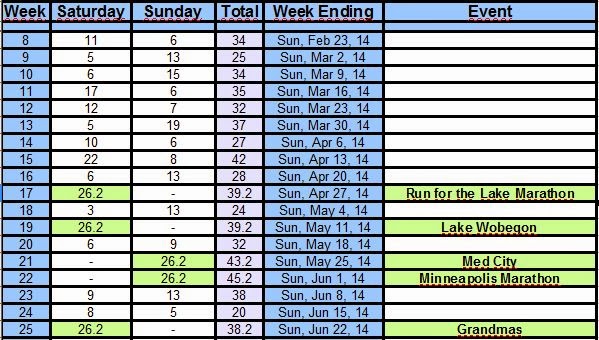 So for those that be wondering how I am going to ramp to this mileage, that is pretty simple, back on January 19th, I had gotten in a 9 mile run so you can see I am resuming from that point and ignoring the last 4 weeks, after all with my base being what it is (meaning not so good) I probably haven't lost a lot of training.

And as for the remainder of the year, in looking at the calendar, I will be able to keep it on cruise control with maybe the need to add a longish run in August. 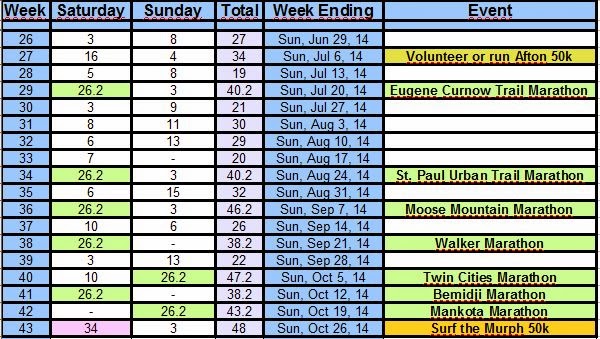 The nice thing about taking the time to look at where I am, is that it gives me some time to consider what I want to do, although I am close to going beyond the point of no return, I still have time to get it together. The other nice thing about looking ahead is it allows me to think about what do I expect to accomplish this year. Is my goal to simply run all of the events or do I want to have a time goal. I have run marathons between 4 and 6 hours over the years but have not gotten under 5 hours since my last knee surgery back in 2003, I have also not trained very well or consistently nor worked to get the weight down either of which would make running faster easier. So a reasonable goal would be to simply get under 5 hours.

I had originally thought that I would push the pace at TCM but since I signed up for the Ultra Loony that might not be the race to do so, in looking at the calendar, my other options appear to be Grandmas or the St. Paul Urban Trail Marathon, of course my other option is to just take what I have on the day I run and let things take care of themselves.