Well it happened, I have finally run a marathon and finished DFL but I finished. I debated long and hard running the Walker North Country this year but I couldn't resist doing it again. After all it was my Birthday weekend, what better way to celebrate a birthday.

Here's the story, I am still plagued by Posterior Tibial Tendon pain and when I run any trails it tends to get pretty painful. Well the Walker North Country has trails and I had pain.

I signed up for the early start as I figured I might need the extra time. Saw Karen G. at the start, turned out she too had signed up for the early start. We decided to start running together, I warned her I would be doing my Galloway run-walk and she was welcome to join me. We did it maintaining a sub 12 minute pace until we hit the trails after mile 7,  I told her I would be fast walking the trails as I feared the trails would cause my foot to get a bit unhappy and by the time we left the trails around mile 12, the foot was hurting. Anyway, back on smooth trails we got back into the run-walk rhythm. I was hoping the foot would calm down but it was throbbing as we hit the second trail section which did me in. Karen took off during this section, I had felt bad that she was staying with me and kept telling her she could take off so was happy to see her go as she was running well. I switched shoes at mile 19 1/2 (Hwy 34 crossing where Karyn was waiting, she had again run the 10k and it sounded like she enjoyed herself) with the hope it would help. I had started the race wearing my New Balance 980's which I had hoped would protect the foot as they are about my stiffest pair of shoes.

Switching shoes (to Altra Repetitions) helped but stopping would have been the best option. I basically hobbled the rest of the way and may have been better to not have switched, regardless I continued to hope that I could get the foot calm which never happened. I eventually walked the final hill, ran through the finish and thought to myself that I bet I just finished in last place. Turns out I did,

All things considered an enjoyable day even with the foot, it does confirm that I need to stay away from trails although one thing that did work that I tried was wearing a compression knee wrap and I was thrilled as I had no knee pain on the trails, granted it was more hiking than running but that is still the first time since my knee surgery that I was able to be on trails without knee pain :-).

Oh well no permanent damage was done and I think it still counts as a marathon finish, now it's on to the Ultra Loony Challenge at TCM.

It's been a busy summer, actually it's been a great summer although not so much from a running perspective. After Grandma's I hemmed and hawed about what to do with the foot and finally scheduled the MRI, I knew it would either end my running for awhile or force me to make some changes. 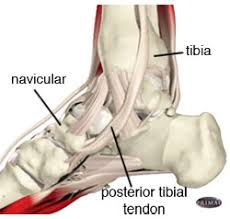 The good news is the MRI was negative, no fracture, he bad news is that means that I have tendinitis. Specifically the Posterior Tibial Tendon at the attachment point to the navicular. I have pretty much figured out all of things that aggravate it and am working to deal with those issues. I may need some PT before I get it all resolved but my concern is that Doctors/PT folks focus on the pain points not the cause so I so I am being my normal stubborn self and working my way through it. I am sure the cause is the calf tear and am foam rolling that and taping the tendon.

As I work through it, I am ramping my long runs with plans to run Walker, then the Ultra Looney followed by Mankato and who knows maybe a few more yet this year.

One other thing, I have pretty much given up on trail running. I have tried a couple times over the last few weeks but my knee just can't do it, funny thing is it is ok on roads. So I am going to take what I can do and be content. The only thing I can figure out is that there is something about the uneven surfaces must be causing my lack of meniscus to cause what feels like bone hitting bone. My plan is to work to get the tendinitis resolved and then maybe try it out again next year. I do miss my trails.

Oh yeah before anyone comments, yes I know Walker has trails but my plan will be to walk the trails so as not to cause me issues. It will slow down my time but I can deal with that.