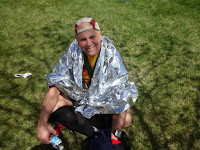 As predicted my training was close but not good enough.

The race went overall pretty well but around 20 miles the foot got pretty sore and I messed up on fueling so the wheels sputtered. I finished but lost 12 to 15 minutes over the final 6 or 7 miles, hopefully I can stay on track at Med City.

It was a beautiful day and the volunteers were great. The Lake Wobegon course is nicer than I would have expected from a bike trail. I thought it would be boring but between the towns, some creeks, some roads, some trees and bridges it was enjoyable. The one part that wasn't enjoyable was when around mile 5 the sweeper came up along side of me as I was in last place. He was on a bike and we talked off and on for the next 13 miles. Around mile 18 I passed a runner and the sweeper stayed with him. It was nice to be alone again and not in last place. After that I continued on until the gas meter went low. It was funny as some bikers passed and then about a 1/2 hour later they came back by and one of them offered me a gel. I must've looked like I needed it, I thanked him but said I had my own except I hadn't taken in anything for 2 hours. So my nutrition for the day consisted of a packet of jelly bellys about an hour in, followed by 2 or 3 Clif  shot blocks at 2 hours and then the gel around 4 hrs which explains the loss of energy. I drank Nuun throughout which works well for me for fluids and electrolytes.

The foot has continued to be sore,not really sure what the issue is as I have some real sensitivity above the arch on the navicular. Tomorrow will be a test, my thinking is to give it a go and if things aren't right to think about a DNF. Hopefully it works out.